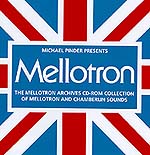 "Michael Pinder Presents Mellotron" is the definitive source for getting the Mellotron sound on your sampler. No loops, no processing, just the full-length sound of each key sampled directly from the most meticulously cared-for Mellotrons and Chamberlins on the planet.

This CD-ROM has been used on recordings and tours by many top artists and producers, including the Smashing Pumpkins, Grant Lee Buffalo, Mitchell Froom, Rick Rubins, Crowded House, Radiohead, The Wallflowers and the Rolling Stones.

Each sound is a 16 meg bank in AKAI format. The disc works great (no tweaks required) on Akai, Kurzweil, E-Mu and Ensoniq ASR-10. (Does not work with Roland 700 series samplers). This is NOT an audio disk, you must have a sampler, Sample Cell or Gigasampler to use this disk.

With the low cost of memory these days, you can affordably load up three sounds at once into your sampler, just like a real Mellotron.

The following sounds are provided:


The presence of the two "three violins" samples brings up an interesting point. Since these sounds come from the same source (at least one extra generation for the tron set), it's an excellent opportunity to A B compare the sound difference between a Mellotron and a Chamberlin. Remember: these samples were taken directly from restored machines, not from the tape masters.

To order, go to the Products page.