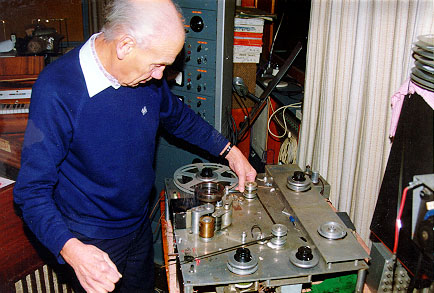 Les Bradley with the "Mothertron". My name for the original tape recorder. Les told me that the inspiration for this machine came to him from a dream of his late father. The problem that prompted this "episode" was one of how to record and time the Mk II Rhythms and Fills from the obviously untimed source tapes (I still don't know how Harry Chamberlin did this). He had to make three tracks allign 6 times for the duration of a single 42 ft. long piece of tape. These six start times also had to match the start times (stations) of the other 34 tapes in that keyboard set. His solution was this double decker replay/record deck that is driven from a single capstan motor and gearing. This machine was completely hand made by Leslie and his brother Frank and is now at the Museum of Science in London. Unfortunately, the display of this equipment still hasn't been built, seven years later.

Ponder, dear reader, for just a moment how you would have solved the problem this machine was built for and perhaps more importantly, the impact this one machine had on the world of popular music.